skip to main | skip to sidebar

[6:18 AM | ]
Group of students from the University of Gadjah Mada "Wolfgang" succeeded in developing a virtual classroom innovations to overcome the limitations of access to education. Innovation is using the tool called Interactive multiuser multitouch Mimbo Box or which can be applied at home or remote schools.

The technology won the third championship of information technology competition "Imagine Cup" Indonesia in 2010 was designed to hold classes remotely using the internet connection. Unfortunately, new limited Mimbo deliver voice and writing teacher, could not be used for face to face between students and faculty.

Mimbo technology and software consists of a touch screen table (table touch) that can be used four students simultaneously. Software in it consists of two interconnected applications, ie applications for students and teachers create an application.

For students, the facilities available ranging from notes, reading digital books, and consulting with teachers. The facilities available for teachers to teach and assess. In addition to the virtual classroom, equipped Mimbo digital library that contains books. There are also applications to test the ability of evaluation of student learning.

Mimbo is also equipped with a program translator application discussions (translated chat room) so that the typed text will be directly translated into the desired language. This application is intended to facilitate students who want to consult with teachers in other countries.

Satrio Nindito Iqbal said the innovation was originally intended to anticipate the limited access to education in remote areas. However, the realization in remote areas encountered several obstacles, namely the high cost of production which reached approximately USD 400 million to 120 students ranging from infrastructure and limited Internet connection or electricity in these remote areas.

In urban areas, said Iqbal, Mimbo potentially be used by the organizers of school at home (home schooling) that the average middle class family comes from above.
Read More...

[6:16 AM | ]
UTUL held for the selection of prospective new students School Diploma Program UGM-quality vocational and the academic ability with an excellent mastery of areas of expertise to support the completion of education in accordance with the deadline. Material selection includes Potential Test, Basic Knowledge, Natural Sciences / Social Sciences (in accordance with the chosen course of study).
Read More...

PBUSMAK a selection for high school students, MA, and vocational schools to enter a vocational school diploma program at Gadjah Mada University through academic selection program as an effort untukmenjaring GMU student candidates who have the academic ability, skill and personal maturity, as indicated by achievements School.
Read More...

[6:14 AM | ]
PBUB intended for students with academic ability coupled with the achievement of science and technology telecommunication (technology, science, and art) The candidate proposed by the school with a maximum of two participants per school with a choice of courses appropriate for the field of achievement. Participant selection was exempted from tuition fees for six semesters.
Read More...

[6:13 AM | ]
PBUPD is a form of concern vocational school diploma program at Gadjah Mada University on local development through partnership program between the regions with the UGM. Addressed to local children who have a high commitment to local development proposed and financed by local governments, government institutions and / or a credible company in the area.
Read More...

[6:11 AM | ]
PBUTM is a form of concern vocational school diploma program at Gadjah Mada University on students with high academic ability but can not be economically viable. The candidate proposed by the school a maximum of two participants per school. Participants exempted from tuition fees for six semesters borne by UGM, if they meet the specified performance and evaluated every year.
Read More...

GMU vision is "To be a world-class research university excellence, independence, dignity, and inspired to serve the interests of Pancasila and the prosperity of the nation." One manifestation of this vision, particularly in terms of contribution to GMU to prepare skilled workers contribute based on science, is organizing a Diploma Program into vocational school management.

Vocational school is the Institute of Diploma in Education as stipulated in the Bylaws GMU is equal to the polytechnic academic executive that organizes vocational education programs and / or Diploma programs include the Professional Education at the level D1, D2, D3, and D4 which are terminal.

Attend vocational schools to be closer to (link and match) between the provision of vocational education graduates with the user community. Updates include process development and academic facilities, student activities and cooperation with relevant agencies.
Characteristics of vocational schools with a majority of the practice is characterized as a translation of the underlying theory so that students become skilled learners prior to entering the workforce after graduation will be.
Read More...

[6:05 AM | ]
GMU also provides scholarships for prospective students that go through the UM UGM. Here's his article: 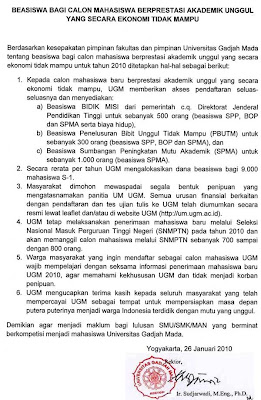